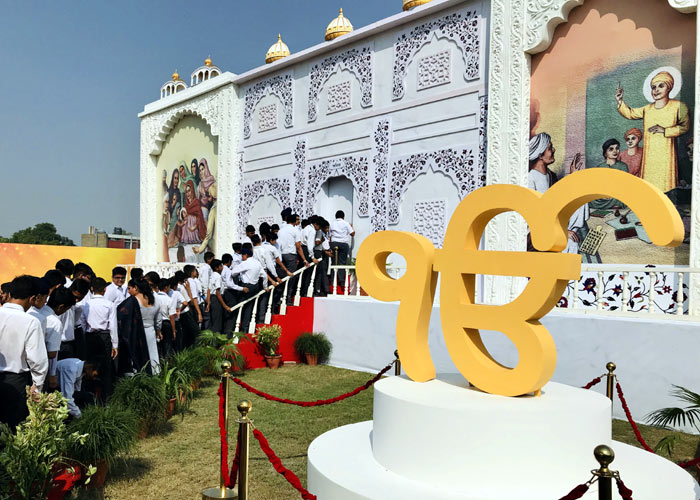 Dedicated to the 550th Parkash Purab celebrations of Shri Guru Nanak Dev Ji, a digital museum and a light and sound show is being organised in the mela grounds of Punjab Agricultural University, here, starting from today. The digital museum has already been set up from today onwards, while two shows each of light & sound show would be organised on October 12 & 13, 2019.

The digital museum started amidst huge response from the people from across the state today, while the light & sound shows would be held tomorrow, i.e. October 12 and on October 13, 2019. Two shows of light & sound would be held on each of the days. Today, more than 3000 people from different age groups and walks of life visited the digital museum.

After inaugurating the digital museum today, Deputy Commissioner Mr Pradeep Kumar Agrawal stated that people of Ludhiana have been dyed in the hues of soulful events with the help of ultra modern shows. He informed that the life of Shri Guru Nanak Dev Ji have been exhibited in the digital museum. The Deputy Commissioner was accompanied by all SDMs as well as senior officials of district administration.

Mr Pradeep Kumar Agrawal informed that in all these places, the digital museum will be open to the public for 3 days continuously while the 45-minute light and sound show with colorful visual presentations, ultra-modern laser techniques and unique acoustics will be open on two days (second and last) and two shows would be held on these two days.

The first of its kind floating light and sound shows would be organised on October 23 and 24, 2019 near village Ladhowal (near toll plaza) on the banks of river Sutlej, here, and would be the centre of attraction for the people in this series. He also informed that entry for these shows is completely free of cost and urged the residents of district Ludhiana to attend these shows in large numbers along with their families.