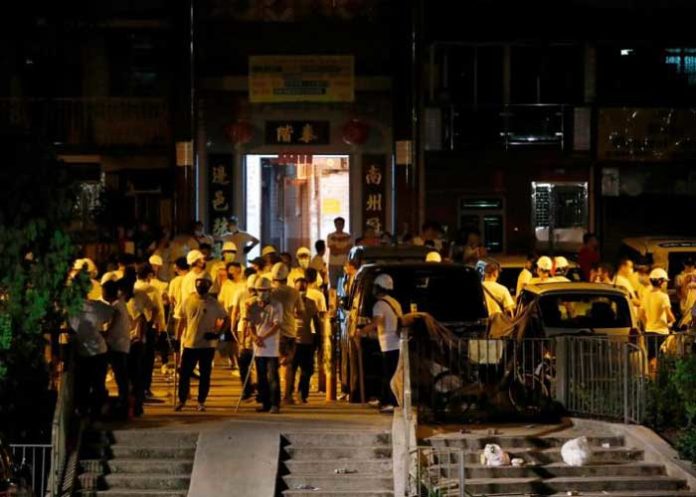 At least 45 people have been injured in an unprecedented violence at a Hong Kong railway station as a rampaging mob armed with metal rods assaulted pro-democracy protesters as well as passengers indiscriminately.

No police officer was in sight as dozens of men — dressed in white shirts and suspected to be triad gangsters — stormed into Yuen Long MTR station late on Sunday night by forcing open closed entrances and attacked a group of pro-democracy protesters who were returning from a rally in the centre of Hong Kong.

The masked men hurled objects at the protesters — dressed in black — and travellers alike and also assaulted members of the public, including journalists with wooden rods and metal sticks, the South China Morning Post reported.

Footage posted on social media of the midnight violence showed the men violently attacking anyone dressed in a black T-shirt on platforms and inside train carriages. Black is the colour of choice for demonstrators engaged in the pro-democracy protests that have been recently sweeping over Hong Kong.

Democratic Party spokesperson Lam Cheuk-ting, who was also among those injured, told the local media that he was attacked by dozens of people whom he described as members of a gang and criticized the police for taking more than an hour to intervene.

One journalist, Gwyneth Ho, was attacked while she was in the middle of live streaming for news website Stand News. She is currently in hospital.

Over the past seven weeks, Hong Kong has been the stage for demonstrations that began as a protest against a contentious extradition bill that, according to lawyers and human rights activists, would allow the extradition to mainland China of fugitives accused of certain crimes.

The bill’s opponents said that the new law could mean that local activists, critical journalists and dissidents in Hong Kong could be sent to mainland China for trial.

Its defenders, meanwhile, claim that it merely sought to fill a legal vacuum, as no formal extradition treaties exist between Hong Kong, Taiwan and mainland China.

The bill was scrapped following a rise in tensions after the mass protests engulfed Hong Kong’s government district.

However, the protesters’ demands, which were initially focused on stopping the extradition bill, have morphed into catch-all calls for democratic mechanisms to be implemented in the Special Administrative Region, Efe news reported.