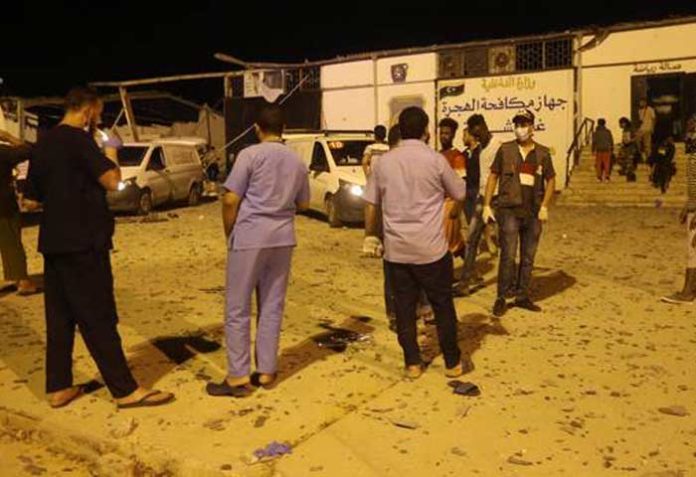 At least 40 migrants were killed and more than 80 injured after an air strike hit a migrant centre on the outskirts of the Libyan capital Tripoli, government officials said on Wednesday.

The UN envoy to Libya, Ghassan Salame, condemned the attack “in the strongest terms”, adding that it “clearly amounts to a war crime”.

Images from the ground showed piles of rubble left where the buildings had been, while emergency crews worked to remove both the wounded and the dead.

In a statement, the UN-recognized government of National Accord (GNA) in Tripoli condemned the “horrific crime”, blaming anti-government forces led by warlord Gen. Khalifa Haftar — the leader of the opposition Libyan National Army (LNA) — for the attack which took place late Tuesday.

On the other hand, Haftar’s forces accused the government of bombarding the centre. There is currently no independent confirmation on who was responsible for the attack.

Women and children were among those hit, Guma El-Gamaty, a member of the UN-backed political dialogue group, told the BBC.

“People were everywhere, the camp was destroyed, people were crying here. There is psychological trauma, the lights cut off. We couldn’t see the area very clearly but just when the ambulance came, it was horrible, blood was everywhere, somebody’s guts in pieces,” Libyan Health Ministry official Doctor Khalid Bin Attia told the BBC.

Haftar, a strongman declaring himself Libya’s supreme leader, encircled Tripoli on April 4 with the apparent aim of sending a clear message to the international community that his primary objective was to sabotage the current peace plan in place, reports say.

Since then, constant fighting has been taking place in the rural areas of Tripoli. The clashes have killed nearly 600 people, injured more than 5,000 and forced more than 30,000 families to leave their homes and become displaced.

The armed clashes have also severely affected thousands of migrants, mostly sub-Saharan Africans, who are in the vicinity of the capital waiting to attempt to illegally migrate to Europe or who are being held in detention centres after failing to do so.

The UN Refugee Agency posted on its official Twitter page that it was “extremely concerned” about the news of the airstrikes targeting the Tajoura detention centre.

The UN envoy to Libya said the attack “clearly could constitute a war crime, as it killed by surprise innocent people whose dire conditions forced them to be in that shelter”. The African Union also condemned the strike.   (Agency)