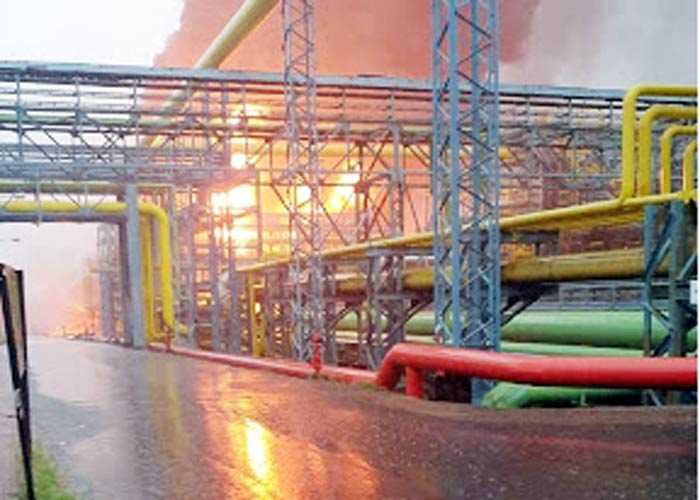 At least four persons, including three CISF jawans, were killed in a massive fire that broke out in a storm water drainage network at the ONGC’s oil and gas processing plant in Uran, Navi Mumbai, officials said here on Tuesday.

An official of Navi Mumbai Police Control told IANS that besides the four fatalities, some more were feared injured in the tragedy.

The Central Industrial Security Force (CISF) jawans of the Fire Wing (ONGC Unit), who were killed in the line of duty, are E. Nayaka, M.K. Paswan and S.P. Kushwaha.

“The CISF salutes the supreme sacrifice of CISF Fire Wing bravehearts who sacrificed their lives in the line of duty during the fire-fighting operations at ONGC Uran, Navi Mumbai,” the CISF said in a tribute.

It added that the CISF will be forever indebted for their bravery and commitment.

Earlier, clouds of dark smoke were seen billowing out of the conflagration on the ONGC premises after the fire erupted at around 7 a.m.

“The fire is being contained. No impact on oil processing and gas diverted to Hazira plants. The situation is being assessed,” an ONGC spokesperson told IANS.

Besides the ONGC’s own fire service and crisis management teams, fire-fighters from Uran, JNPT, Navi Mumbai and surrounding areas rushed to battle the blaze. The cause of the fire is not yet known.

The blaze was brought under control after nearly three hours and cooling operations are underway at the site.

In a fallout of the fire, gas supplies of both PNG and CNG were severely hit in Mumbai, according to Mahanagar Gas Ltd. (MGL).

The Mahanagar Gas Ltd, which supplies domestic, industrial and vehicular gas, said that gas supply to its City Gate Station, Wadala, has been badly affected.

“We are ensuring that supply to domestic PNG consumers is maintained on priority without interruption. However, many CNG stations in Mumbai may not operate due to low pressure in the pipeline,” the spokesperson said.

Accordingly, the MGL has advised industrial and commercial customers to switch over to alternate fuel till the gas supplies across MGL’s network is restored by ONGC. It was not immediately clear when the gas supplies would be restored.

The MGL network is spread across entire Mumbai, parts of Thane, Palghar and Raigad, serving lakhs of domestic, industrial and other consumers.  (Agency)