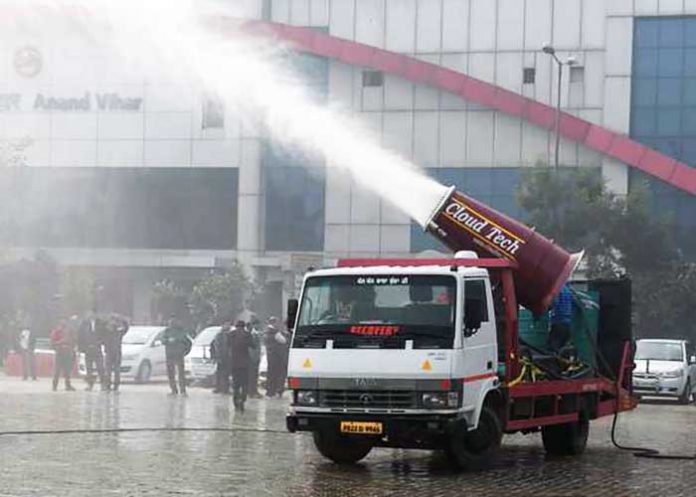 New Delhi, Nov 22, 2020-
To improve the national capital’s air quality, the Delhi government on Sunday said it has installed 23 anti-smog guns at key intersections and construction sites across the city, and assured that this number will be increased, if necessary.

He also said that PWD officials have also been instructed to sprinkle water on trees, roads and on the construction sites to combat dust pollution.

“A total of 150 water tankers have been deployed for sprinkling water,” Rai said.

“I have also instructed the PWD officials to increase the number of tankers further so that all the key roads of Delhi can be covered. If necessary, we will install more anti-smog guns as well at the key intersections of Delhi.”

The Delhi government this year has launched a massive anti-pollution campaign – ‘Yuddh Pradushan Ke Viruddh’ – which is being led by Chief Minister Arvind Kejriwal and Rai. However, pollution levels breached the emergency threshold twice this month here with a grey apocalyptic smog enveloping the city for days, blotting out the sun and obsuring landmarks.

To curb increasing pollution, the Delhi government had on November 5 also banned the sale and use of all kinds of firecrackers in the city till November 30.

The National Green Tribunal had also imposed a total ban on sale or use of all kinds of firecrackers in the National Capital Region from November 9 midnight to November 30 midnight.

Sources in the government said that over 70 lakh litres of water was sprinkled at 13 pollution hotspots in the past 36 days by the Delhi Fire Service to hold down dust as a measure to improve the deteriorating air quality in the city.

The drive began on October 17 following orders from the Delhi government to check the dust pollution in the city, said the officials.

Delhi’s Fire Service Department has been also participating in the exercise and springling about two lakh litres of water on city’s roads, construction sites and other key places regularly.