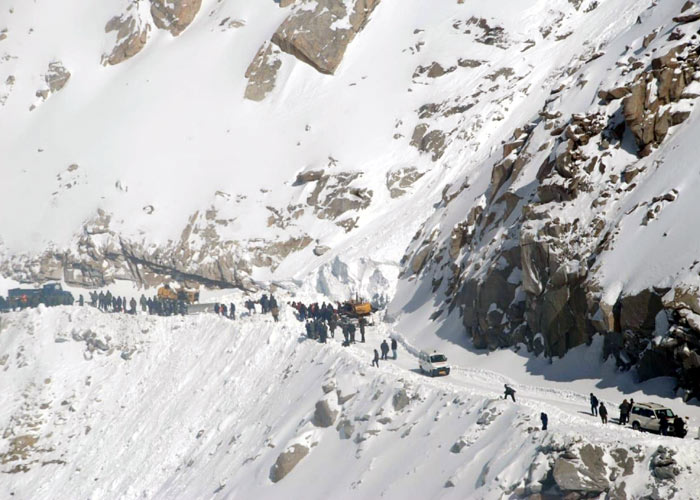 As many as 167 Army personnel lost their lives in Siachen Glacier in the last 10 years due to weather-related incidents, sources said on Tuesday, a day after an avalanche killed 4 soldiers and two civilian porters there.

The casualty figure between 2009 and 2019 includes six officers, the sources said.

They did not provide break-up of the casualties, but it is assumed that all the deaths took place in weather-related incidents since the military confrontation between the forces of India and Pakistan has been practically nil during this period.

On Monday, four Army soldiers and two civilian porters lost their lives after being hit by an avalanche in the northern part of the glacier while on patrol duty at a height of around 19,000 feet above sea level.

After the avalanche hit the patrol team of eight personnel around 3 p.m. on Monday, a quick response team was immediately pressed into service to rescue them from under the snow. The team managed to pull out all eight men and even transferred them to a military hospital where six were declared brought dead from hypothermia (extreme chill).

Experts said here on Tuesday that defence forces need to make use of better technology to avoid losses while inherent dangers of operating in the high altitude region cannot be ruled out altogether.

Avalanches and snow-storms are experienced regularly by troops operating in the Siachen. The Army monitors advancing avalanches with data provided by the Manali-based Snow and Avalance Study Establishment (SASE). The Army also provides soldiers with avalanche bags and avalanche victim detectors in the form of beacons which would help their recovery in case they are trapped under the snow.

“The SASE has its monitoring stations in snow-bound areas and provides data and warnings about advancing avalanches in Siachen. There are standard operating procedures too for soldiers in the Siachen. Casualties in Siachen have come down over the years through the induction of better technology in operations even though there is scope for improvement,” former Northern Army Commander Lt Gen (retd) D.S. Hooda told.

Experts said though meteorology is not an exact science, monitoring stations can be upgraded with the state-of-the-art technology to better predict avalanches and snow storms. “Recco systems, ground penetration radars and drones can be made use of in locating soldiers trapped in avalanches,” added Hooda.

A recco system consists of a radiator, carried by a soldier, which emits signals that can be captured by a reciever. A ground-penetration radar is a device that uses electromagnetic radiation to detect presence of lives under the subsurface of the soil or the snow.

In the past, avalanches have hit not only patrolling soldiers but also Army posts. In 2016, ten soldiers were buried alive after an avalanche hit a Army camp in northern Siachen.

Former commanders said northern region of the Siachen, despite its treacherous terrain and weather conditions, needs to be constantly guarded against intrusions across the Actual Ground Position Line (AGPL) which separates India from Pakistan.

“The AGPL has to be guarded at all costs. The standard-operating procedures for soldiers deployed in the Siachen and are regularly reviewed too. Besides there has been a constant advancement of technology used in the region that has brought down casualty figures much lower than before 1983 when we didn’t even have basic equipment.

In those days, we could only manage to extricate dead bodies as compared to the incident on Monday in which the trapped personnel were evacuated in the shortest possible time,” former Director-General of Military Operations retired Lt Gen Vinod Bhatia told.

The Siachen Glacier, which once used to be a demilitarized zone, came under the strategic control of India in 1984 following ‘Operation Meghdoot’. The operation was undertaken by the Indian armed forces after Pakistan allowed a Japanese team to undertake an expedition to a strategic peak in the glacier. The glacier directly overlooks the Aksai Chin, an area that is under dispute between India and China.  (Agency)