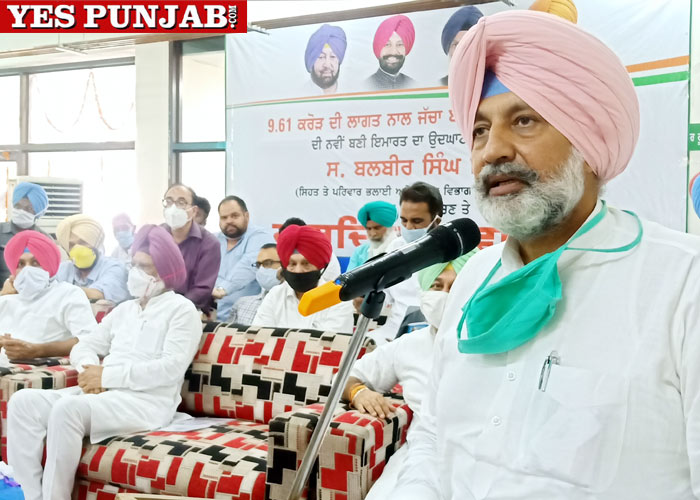 Punjab Health & Family Welfare Minister Mr Balbir Singh Sidhu today the Capt Amarinder Singh led Punjab government is making dedicated efforts for developing world class health services to its citizens. He said that 25 new government hospitals have been started in the state, while 12 more hospitals would be opened by the end of 2020.

After inaugurating the 30-bedded Mother Child Hospital at Khanna today, Mr Sidhu said that ever since the Capt Amarinder Singh led government was formed in Punjab, special emphasis is being given to health services.

He said that to check the shortage of staff in the department, an agenda to recruit 4000 personnel would be put up in the cabinet meeting shortly. Besides, the services of contractual staff would also be regularised soon.

He assured that the existing building of Civil Hospital Khanna would be repaired and there would no shortage of ambulance. He said that he would also raise the issue of opening of a medical college in area with the Chief Minister.

Mr Sidhu said that the performance of Punjab in fighting COVID 19 has been commendable and saving peoples lives is our priority. He also urged the residents for making Mission Fateh of Punjab government successful.

While speaking on the occasion, Khanna MLA Mr Gurkirat Singh Kotli raised some problems of the area. He said that as Khanna falls on a national highway, there should be no shortage of health services here. He also thanked the Punjab government as well as Health & Family Welfare Department for opening of Mother Child Hospital.

Fatehgarh Sahib MP Dr Amar Singh said that the Mother Child Hospital would prove very beneficial for the area residents. He appreciated the efforts of health department in fighting COVID 19 pandemic. He also raised the issue of opening a medical college at Khanna.