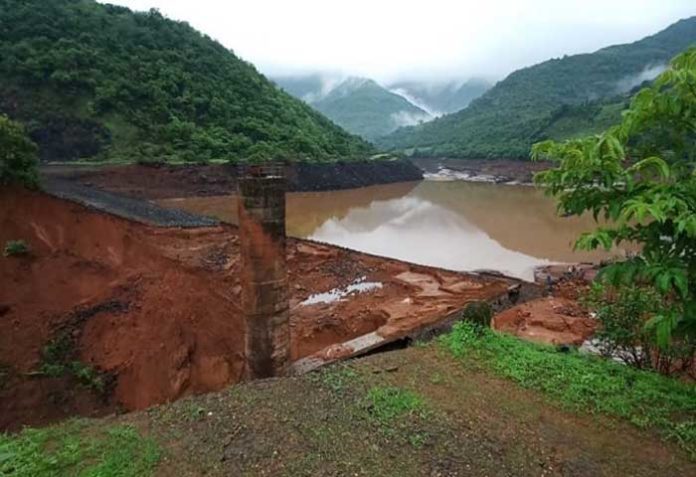 At least 11 persons were killed while one was found alive and another 12 are still missing after a small dam burst near Bhendewadi hamlet in Maharashtra’s Ratnagiri district, following Tuesday’s torrential downpour, officials said here on Wednesday.

“A report on the incident concerning the Tiware Dam was sought by the Prime Minister’s Office, Union Home Ministry, besides Maharashtra Governor and the state headquarters Mantralaya, which has been submitted,” a district official told, requesting anonymity.

Maharashtra Chief Minister Devendra Fadnavis ordered a high-level probe into the incident while state Water Resources Minister Girish Mahajan who visited the tragedy site, assured that the homes of the surviving villagers would be rebuilt and the dam repaired on priority.

Congress’ Leader of Opposition Vijay Wadettiwar demanded criminal complaints for murder to be filed against the state government officials, a ruling Shiv Sena party legislator whose company had built the dam, and resignation of minister Mahajan.

Opposition Nationalist Congress Party (NCP) national spokesperson Nawab Malik said though locals had warned years ago of breaches in the dam, local authorities did not take measures and demanded that they should be booked for culpable homicide not amounting to murder for lapses.

Both the parties have also demanded suitable compensation for the victims’ families and their rehabilitation at alternative sites.

“The incident happened around 9.30 p.m. (July 2) when the Tiware Dam, which had started overflowing in the evening after heavy rain, breached around an hour later,” Resident Deputy Collector Datta Bhadakawad told.

As millions of litres of water gushed out unleashed, it resulted in a floodlike situation, inundating at least seven villages downstream in its path, besides a dozen homes in Bhendewadi with around 24 people living in 11 huts which were washed away.

The villages downstream are: Daadar, Akle, Riktoli, Ovali, Kalkavne, and Nandivase, with an estimated total population of around 3,000 in a hilly region, nearly 90 kms from the district headquarters.

Disaster Management Officer Ajay Suryawanshi said all the victims were reported from Bhendewadi hamlet, which was adjacent to the dam wall, and there are no casualties from any of the villages downstream.

The villages were inundated last night, but now the situation is normal as the dam waters receded and there is a lull in the rains, he added.

“Of the people reported missing, the search teams have recovered 11 bodies from the slush left behind by the gushing water, and one was found alive after nearly 20 hours three kms downstream,” Suryawanshi told.

He has been identified as a Bhendewadi resident, Baliram K. Chavan and has been admitted to hospital for treatment, though he had no visible external injuries.

The warlike search operation was called off at sunset on Wednesday and will be resumed at daybreak on Thursday by the NDRF and police teams using sophisticated satellite-aided gadgets to track the victims who may be stuck in the sludge, forests or under boulders in the vicinity.

Around 20 vehicles belonging to the villagers and some outsiders have also been washed away in the dam water.

Built in 2004, the dam is 308 metres long, 28 metres wide and 28 metres tall with a storage capacity of 0.08 TMC, making it a small irrigation project despite the huge quantity of water stored in it, said Suryawanshi.

“The locals had lodged complaints about leakages from the dam and demanded repairs. They were told that repairs had been carried out, but now this tragedy has occurred. We shall probe this thoroughly,” Mahajan said.    (Agency)