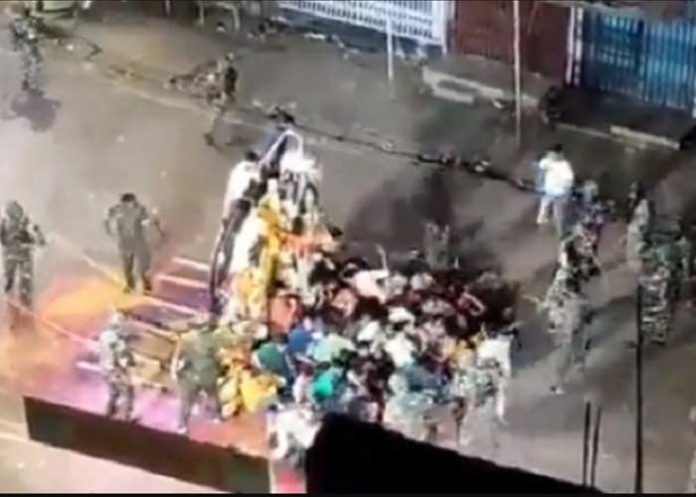 Patna, Oct 27, 2020-
A person was killed and nearly 20 others, including a dozen-odd police officials, injured during a police baton charge and firing by unidentified persons during the immersion of Maa Durga’s idol in Munger in Bihar, police said on Tuesday.

The mishap was reported from Deen Dayal Upadhyay Chowk around 11.30 pm on Monday. As per the tradition, the idol was ferried by 32 persons called ‘kahar’ to the river bank.

Since polling in all three Assembly constituencies in Munger district is slated for October 28, authorities wanted the immersion to be completed speedily. “This led to an altercation between police and devotees who soon turned violent. Police baton-charged the gathering to disperse it when someone fired shots,” said Sanjay Kumar Singh, Additional Chief Electoral Officer of Bihar.

A person identified as Anurag Kumar, 22, lost his life while Sumit Kumar, Dabloo Kumar, Vikash Kumar, Chandan Kumar, Dev Prakash, Ritesh Kumar, Aditya Kumar, Saurav Kumar, and Amit Paswan, all in the 20-40 age group, sustained gunshot injuries in the incident. They were referred to Bhagalpur where they were said to be out of danger.

“Around a dozen-odd police officials, including six SHOs, were also injured. Police detained around 100 persons in this connection. Their questioning is underway,” Singh said.

District administration deployed additional paramilitary force in the are to restore peace. ADG (Law and) Order Amit Kumar and ADG (Headquarters) Jitendra Kumar went to Munger to assess the situation.

Meanwhile, the Rashtriya Janata Dal demanded a court-monitored inquiry. “It is the failure of law and order and Munger SP should be suspended immediately,” said RJD leader Chitranjan Gagan. (Agency)